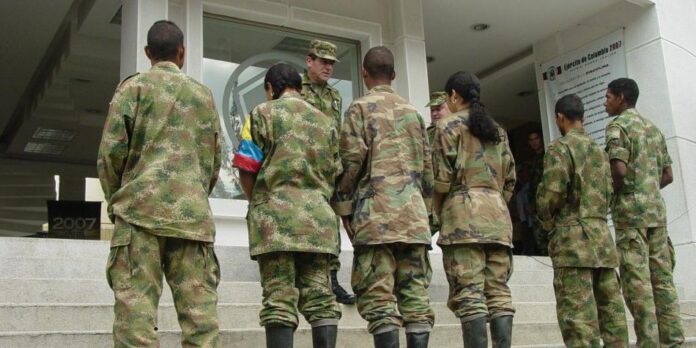 After fighting with the Revolutionary Armed Forces of Colombia (Farc) for more than two decades, Luz Marina Giraldo started a career in local politics and ran for a seat on the town council in Mesetas, a rural district in Colombia’s eastern plains.

But her campaign ended abruptly last year when hooded men burst into her home and killed her partner, Alexander Parra, also a former Farc guerrilla fighter, shooting him five times in the back.

Ms Giraldo fled with her children to a nearby city and has not returned to Mesetas.

She is one of hundreds of former guerrilla fighters dressed in white T-shirts who marched into Colombia’s capital, Bogotá, on Sunday to seek a meeting with President Iván Duque.

The protesters, who have been holding demonstrations in front of the presidential palace, say the government is not keeping up with commitments made in a 2016 peace deal that led to the disarmament of 13,000 fighters and transformed Latin America’s oldest guerrilla group into a political party.

The new party retained the initials Farc but they now stand for Common Alternative Revolutionary Force.

While the former fighters may have laid down their arms, their lives are still at risk from other guerrilla and drug-trafficking groups, and one of their key demands is for more protection.

«At this moment we face so many threats we don’t even know where the bullets are coming from» says Ms Giraldo.

Carrying a white banner with a portrait of her late partner wearing a cowboy hat, she is followed everywhere by two bodyguards assigned to her by the Colombian government.

More than 230 former fighters have been killed since the peace deal was signed, according to human rights groups.

And even though it has now been almost four years since the peace agreement was signed, the rate of killing has not decreased.

The UN verification mission in Colombia says 50 former Farc rebels were killed in the first nine months of this year. In October, four more were murdered, according to human rights group Indepaz.

Among them was Juan de Jesús Monroy, a well-known ex-Farc commander who – after demobilising – had been leading farming projects in south-eastern Meta province.

His murder triggered the march on Bogotá, which was joined by about 700 former Farc rebels from different corners of Colombia.

Juan Carlos Garzón, an analyst of Colombia’s armed conflict at the Ideas for Peace Foundation, says the killings have happened mostly in remote rural areas previously controlled by the Farc rebels, where security has been deteriorating since the peace deal was signed.

«Some of these groups have old scores to settle» with Farc fighters, Mr Garzón explains. He says that criminal groups are trying to recruit former fighters and get farmers to grow coca, the raw material for cocaine. These groups target Farc party members, or anyone else who is trying to prevent that.

Organisations currently fighting over former Farc territory include drug-trafficking groups like the Gulf Clan, the National Liberation Army (ELN) guerrilla and dissident groups made up of ex-Farc fighters who did not want to lay down arms.

Colombia’s Attorney General estimates that 70% of the murders of former Farc rebels have been committed by these groups but according to the UN, there have so far only been convictions in 31 cases out of more than 230.

The Colombian government has attempted to protect former Farc fighters by assigning troops to watch over «re-incorporation villages», places where many former guerrillas live and work on farming projects.

Former Farc rebel leaders who are thought to be at greater risk are also assigned bodyguards and given bullet-proof vehicles. Currently there are 1,100 bodyguards who work with the National Unit for Protection and are assigned to former Farc rebels.