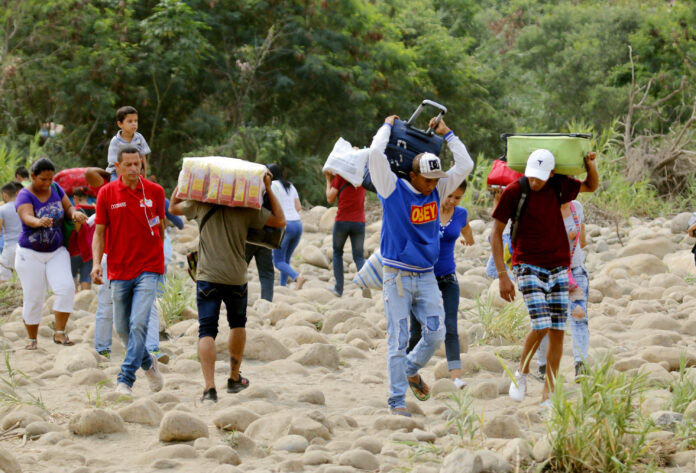 Colombia, which slammed its border shut in March to protect against the spread of the coronavirus, has long been the top destination for migrants fleeing economic and social collapse in neighboring Venezuela.

But, with little prospect of an improvement in Venezuela’s economic situation, the majority of those are eventually expected to try to return to Colombia, many with relatives or friends, said the head of Colombia’s migration agency, Juan Francisco Espinosa.

Hundreds are already crossing illegally each day on foot along the porous 2,219 kilometer (1,380-mile) border, avoiding patrols by the army, police and migration officials.

“We’ve been walking for 12 days: experiencing cold, sleeplessness, hunger, counting each day and trusting in God,” said 42-year-old Jose Saenz. He and his eldest son, 22, hope to reach Pereira, in the coffee-growing region of western Colombia, where he used to work in construction.

The father-of-five returned to Venezuela last year for the holidays and then was unable to return when the pandemic struck. He spoke to Reuters on the side of a highway headed to the city of Bucaramanga, still weeks of walking away from his destination.

A majority of the estimated 1.7 million Venezuelans who live in Colombia are undocumented and make their living informally in construction, street-selling or deliveries.

The government is expected to extend the border closure.

When the border re-opens, some 200,000 migrants are forecast to cross to Colombia within three to five months, taking the total migrant population to about 2 million, Espinosa said.

Colombia’s public health and education services are available to migrants regardless of their immigration status. The country has received relatively little support from the international community and repeatedly asked for more aid.

Controlling the border is close to impossible. There are some 53 illegal border crossings in Norte de Santander province alone, said General Marco Evangelista Pinto, commander of the army’s second division.

“Generally, they come with children, pregnant women, elderly adults and we just tell them they can’t pass here. And what they do is find other places,” he said.

About 300 Venezuelans arrive in Colombia each day via illegal crossings, migration authorities and the army estimate, risking contact with armed groups and having to ford swollen rivers during rainy season.

“This is the second time I’ve come to Colombia,” said Yesenia Marquez, 39, walking along a highway connecting the cities of Pamplona and Bucaramanga with her two children.

“I had to return to Venezuela because of family problems and when I decided to come back, COVID blocked my way.”