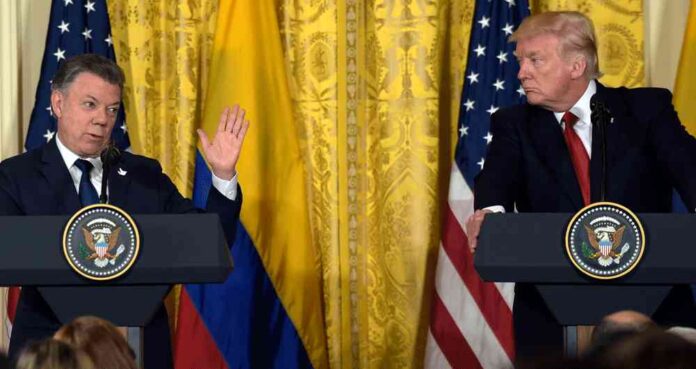 “The last administration also negotiated the terrible Obama-Biden-Santos agreement, surrendered to colombian drug cartels, and caused illicit drug production to increase. Under my administration we work with our Colombian peers to launch a historic operation against drug dealers and since April we have seized an historic 227 tons of toxic narcotics. No one had ever done anything like that,” Trump said.

It should be remembered that earlier this year, President Donald Trump and his Colombian partner Ivan Duque had a working meeting at the White House in Washington, and the message of the US representative was clear: Colombia must implement air spraying against illicit coca crops.

“You’re going to have to do aerial spraying. Air spraying must be used to combat illegal crops in Colombia if they want to meet Colombia’s planned goals of eradicating those illicit crops,” Trump said at the time.

In the meantime, Duque reaffirmed at that meeting that his Government would implement all the tools available to it to combat illicit crops, as well as to implement air spraying accurately.

“We need to combine all the elements at our disposal, not just precision spraying. The levels reached last year in manual eradication are historic. We must work with all the elements and fight against that crime that is affecting our people and every country in the world,” Duque said in his meeting with Trump.