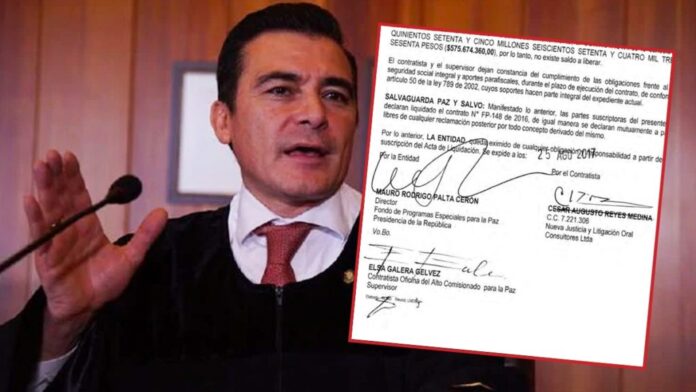 Another document has surfaced that has intensified demands that Judge Cesar Reyes answer questions about a suspicious payment of $200,000 his consulting company obtained in 2016 through a contract from the office of then-President Juan Manuel Santos.  The new document reveals that the Santos official who supervised the mysterious contract, Elsa Margarita Galera Gélvez, was then given a job in Reyes’ own judge’s chamber after he moved to the Supreme Court.

This means the connections between the money, the judge and Santos’ office migrated to the Supreme Court chambers where Reyes oversaw the case of former President Álvaro Uribe.

Santos is Uribe’s chief political enemy and the architect of the power-sharing deal with the terrorist Revolutionary Armed Forces of Colombia (FARC) in 2016.  Reyes is the judge who received the sham case against Uribe in the Supreme Court, interrogated the former president to no avail, and then authored the order to arrest him without charge on August 4, 2020.

The timeline of events detailed in the documents that have become public since Uribe’s arrest continue to suggest a clear conflict of interest that Reyes failed to disclose as he oversaw the Uribe case:

This week, a member of Colombia’s House of Representatives demanded an official investigation into the contract so that Reyes will be compelled to answer the mounting questions around whether he was ethically impeded from overseeing the already battered “case” against Uribe.