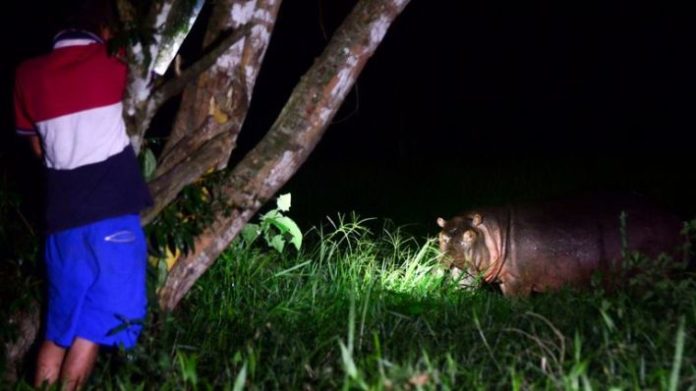 Residents in Colombia have expressed concern about hippos – linked to the late drug lord Pablo Escobar – wandering into their communities.

There are fears that people could be attacked by the potentially aggressive three-tonne animals which walk down streets and approach homes in the rural town of Doradal.

At the height of his power in the 1980s, Escobar brought four hippos into the country to keep inside his private zoo at his Hacienda Napoles estate northwest of Bogota.

After his death in 1993, many of the animals housed at the 5,500-acre property were taken to new homes or died – but the hippos were too large and expensive to transport, so they were abandoned.

Now, an estimated 80 descended from the four live in and around the Rio Magdalena, Colombia’s main river, and their habitual wandering has sparked concern among locals including primary school teacher Wilber Quinones and her colleagues.

She said: “We have to lock ourselves inside with the children to try and avoid an accident.”

Another local, Giver Cardona, was riding his motorbike one morning earlier this year when he crashed into a hippo.

“Now when I pass by here in the mornings I go slowly and check around every corner,” Cardona said. “They keep us worried.”

There have so far been no reports of the hippos attacking humans, but their rapid population growth has residents fearing that could change.