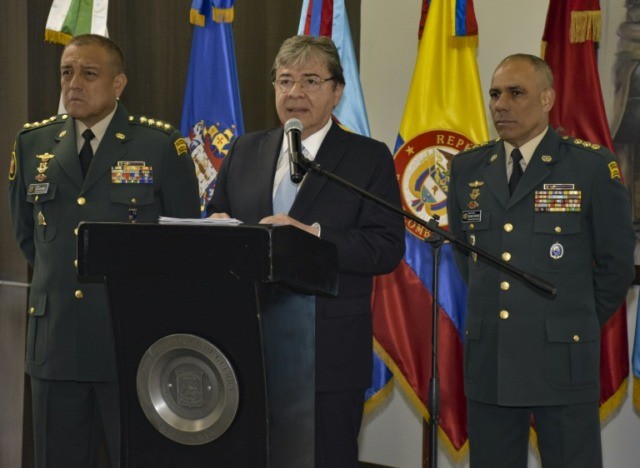 Colombia’s Defense Minister said Monday the military will step up an offensive against drug trafficking gangs responsible for clearing thousands of hectares of protected national parks for coca plantations.

“The police are not going to withdraw from the national parks where the criminals are trying to settle,” Carlos Holmes Trujillo told reporters in Bogota. “We are going to harden the military offensive to remove them from their dens.”

The government said some 700 hectares (1,730 acres) of forest in the Sierra de la Macarena national park in southern Colombia have been destroyed by dissidents of the former FARC guerrilla group who rejected a 2016 peace agreement.

It said the dissidents were forcing local peasant farmers to clear the forest and “commit a massacre against nature,” in order to develop coca plantations.

“What happened in Macarena is a crime against the environment. Those who today promote fires are criminals who want to destroy the forests and poison the rivers to plant coca,” Trujillo said.

A special environmental protection force is to be set up as part of the offensive, he said, in a broad plan to safeguard natural resources in what the UN says is the most bio-diverse country in the world after Brazil.

Last year, the government of President Ivan Duque launched Operation Artemisa to counter widespread deforestation, following the destruction of nearly 200,000 hectares in 2018, mainly in the Amazon.

In addition to the indiscriminate cutting of trees for agriculture, illegal mining and coca plantations pose a threat to the country’s natural resources, according to the government.

Former national parks service director Carlos Castaño told Colombia’s Radio W in an interview Monday that former guerrillas had threatened park officials in a bid to force them to leave the reserves.

Around 2,300 FARC dissidents continue to operate, according to the government, funded by drug trafficking and illegal mining.