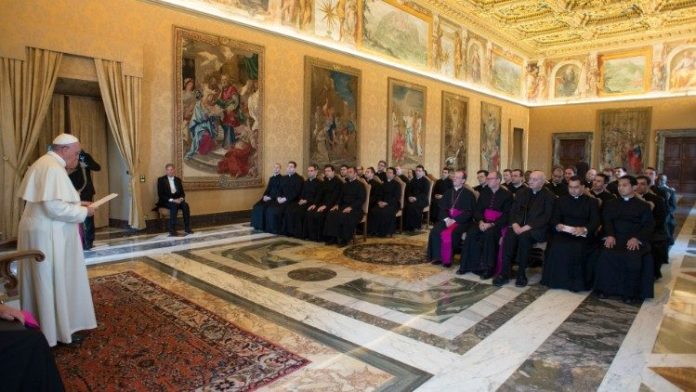 Pope Francis has introduced a year of missionary experience into the curriculum of those preparing to enter service in the Holy See’s diplomatic corps.

The Pope had foreseen this change in his final speech at the Synod on the Amazon, and now it has become a reality.

In a letter to Archbishop Joseph Marino, the new President of the Pontifical Ecclesiastical Academy – which trains nuncios for the Vatican’s diplomatic staff – Pope Francis requests an addition to the curriculum: one year spent on mission within a local Church. The letter is dated 11 February 2020.

The Holy Father expresses his “desire that priests preparing for the diplomatic service of the Holy See devote a year of their training to missionary service in a diocese.”

“I am convinced,” he adds, “that such an experience will be useful for all the young men preparing for or beginning priestly service, but especially for those who will someday be called to work with the Pontifical Representatives and, afterwards, will in turn become Envoys of the Holy See to nations and particular Churches.”

Pope Francis quotes a speech he gave to the Pontifical Ecclesiastical Academy in June 2015: “The mission to which you will be called one day to carry out will take you to all parts of the world. Europe is in need of an awakening; Africa is thirsty for reconciliation; Latin America is hungry for nourishment and interiority; North America is intent on rediscovering the roots of an identity that is not defined by exclusion; Asia and Oceania are challenged by the capacity to ferment in diaspora and to dialogue with the vastness of ancestral cultures.”

In his letter, the Pope adds that “to take on in a positive manner these growing challenges for the Church and the world, future diplomats of the Holy See need to acquire – in addition to a solid priestly and pastoral formation” and that offered by the Academy – “a personal experience of mission outside their own diocese of origin, sharing a portion of their journey with the missionary Churches and their communities, participating in the daily activity of evangelization.”

In this vein, Pope Francis asks Archbishop Marino to “put into practice my desire to enrich the Academy’s formation curriculum with a year dedicated entirely to missionary service in the particular Churches spread throughout the world. This new experience will come into force starting with the students who begin their formation in the next academic year 2020/2021.”

Effecting this change, writes the Pope, will require “first of all close collaboration with the Secretariat of State and, more precisely, with the Section for the Diplomatic Staff of the Holy See (the so-called Third Section), as well as with Pontifical Representatives, who will certainly not fail to provide valuable assistance in identifying the local Churches that are ready to welcome the students and closely follow their experience.”

“I am certain,” concludes Pope Francis, “that – once the initial concerns that may arise in the face of this new style of formation for future diplomats of the Holy See have been overcome – the missionary experience offered will be useful not only to young academics but also to the individual Churches with which they will work. And I hope it will encourage with other priests of the universal Church the desire to make themselves available to carry out a period of missionary service outside their own diocese.”