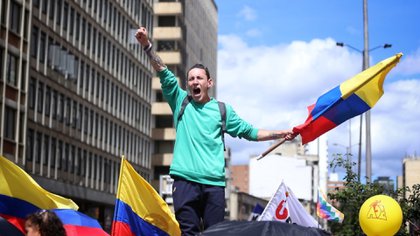 At present, a violent mob, incited by propaganda and subversive funding, has disseminated false information against the police and the government of Iván Duque. We are flooded with fake news and careless reporting which has been picked up and amplified by media outlets and international organizations, which rush to circulate falsehoods without analysis, generating waves of dangerous misinformation that incites violence, brutality and an onslaught of cyberattacks.

The protests in Colombia are predominantly violent and destructive, and organized with the purpose of sowing panic and unrest, and fanning the flames of public uncertainty. The Comité del Paro is a facade to disguise destructive, terrorist and subversive activities that threaten healthy citizen coexistence and the rule of law.

The riots are financed by narco-terrorism and are inspired by “Colombia Humana”, a movement led by Gustavo Petro (see: M-19), whose objective is the seizure of power through political activity based on citizen protest. Similarly, we have seen influence the G-2 of Cuba; gangs connected with the Venezuelan communist regime; and urban narco-terrorist militiamen of the FARC and ELN, led by fugitives from Colombian justice who continue to run covert operations from Venezuelan territory. These so-called FARC-EP dissidents, who identify themselves as the “Bolivarian Movement” are supported by the Venezuelan dictator Nicolás Maduro and the leader Diosdado Cabello.

The riots and acts of destructive violence are strategically set in urban centers, causing shortages and immobilization of large Colombian cities. There is a marked difference between the peaceful demonstrations which have expressed a genuine feeling of disagreement and the organized guerrilla groups, backed by illicit money, that have co opted the movement by threatening union leaders and other professional representatives, forcing them to participate or speak out in favor of the strikes.

The reality is that, with dirty money from the FARC, ELN and drug trafficking, these insidious forces are financing and mobilizing indigenous communities and young urban gang members (ordinarily engaged in microtrafficing) to revolt and vandalize our cities. These organized groups are systematically attacking strategic targets such as mass transportation and traffic hubs, and destroying community service centers such as banks, supermarkets, stores, shopping centers and health centers in order to take our citizens hostage and force us to bend to their will.

We must defend Colombia and our civil state, and support an honest, hardworking president and government that has dedicated itself to building a culture of legality through example, using good sense and measured legislation. The future prosperity of our nation is dependent on a robust business community, one that generates and maintains jobs and opportunity, particularly in the midst of the great difficulties presented by the COVID-19 crisis.

Promoting and encouraging violent mass protests and illicit activities in the midst of public health crisis and economic recession brought on by a pandemic goes beyond inhumane and irresponsible – it is willful and criminal.