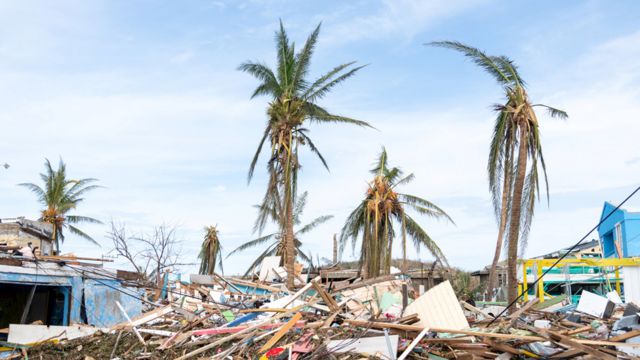 Nearly all the infrastructure on the island of some 6,000 people, near the coast of Central America, was damaged or destroyed by the storm, which sent rubble raining down on top of Chamorro, 29.

“I was saved by my mattress,” Chamorro said, as he showed a Reuters reporter the temporary repairs he has made to the room’s roof. “Stuff was falling on us, debris and everything, but thank God we survived. Material things you can get back, the important thing is life.”

Iota’s winds and heavy rains have killed around 40 people across Central America and Colombia, including at least two in Providencia.

In Nicaragua, it inundated low-lying areas still reeling from the impact two weeks ago of Eta, another major hurricane that killed dozens of people in the region.

“When I got up and looked out, the first impression I had was that the neighbors were dead,” air conditioning technician Chamorro said.

“I had to go out to see how my relatives were…when I arrived I found out everyone was alive.”

Many residents are still in shock over the destruction, Chamorro said, but the born-and-bred islander is committed to rebuilding.

“We’ll fight and get ahead because this is a new beginning,” he said. “More than asking God why, we have to be grateful we’re alive.”

Colombia’s government has credited an alerts system and shelters for the low death toll on the island, whose residents speak a Creole language as well as Spanish.

Larger island San Andres, part of the same archipelago and which also sustained damage in the storm, has become a destination for hundreds of evacuees from Providencia seeking to reunite with family members.