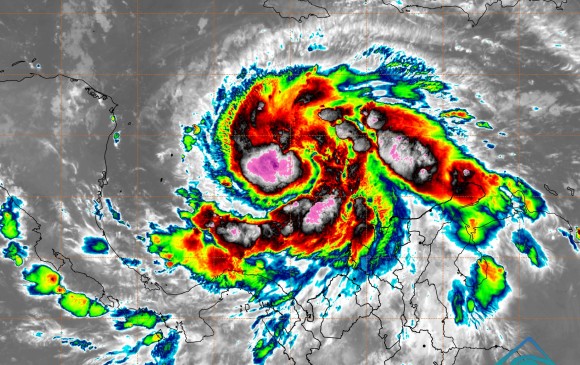 At least five people were killed and 12 reported missing as tropical storm Iota caused landslides in Colombia’s Pacific region and flooded cities in the country’s Caribbean coast on Saturday.

President Ivan Duque came under fire after he announced to be sending relief to Guatemala, apparently unaware a humanitarian crisis was unfolding in his own country.

According to the disaster management unit of the  Antioquia department, several landslides in the town of Dabeiba killed at least five people. Twelve people were reported missing.

One of the landslides disconnected the northwestern Uraba region from the rest of Antioquia, according to Governor Anibal Gaviria.

In the western Choco province, the Andagueda and Atrato rivers overflowed and destroyed approximately 700 homes, according to ombudsman’s office of Lloro.

The road connecting province capital Quibdo was allegedly washed away, disconnecting the entire province that has suffered decades of state neglect from the rest of the country.

Cartagena, where reportedly 12 neighborhoods flooded, was hit hardest of the cities in Colombia’s Caribbean region.

Floods in the nearby coastal city of Santa Marta were also reported.

President Ivan Duque appeared unaware about the crisis and was posting images of Twitter of the air force sending aid to Guatemala while the Pacific and Caribbean regions were suffering humanitarian crises.

It wasn’t until in the evening that the president began coordinating relief for the areas struck by the extreme weather.

Duque’s latest display of ignorance of what was going on in the country triggered a flurry of insults of citizens who appear to lose patience with the notoriously inept government.

Many expressed their discontent about the government’s chronic neglect in the coastal regions where no serious efforts appear to have been made to prevent disasters like Santurday.