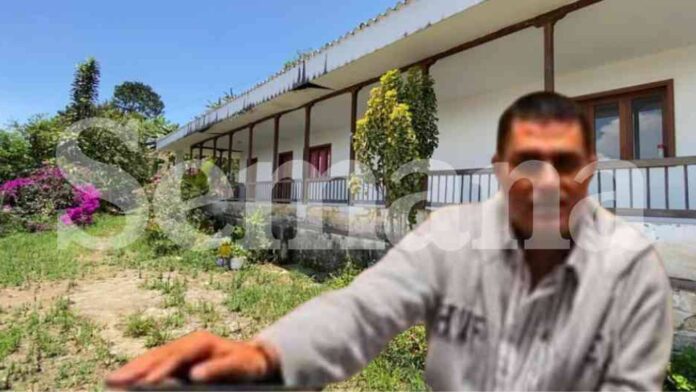 Attorney General’s Office says Juan Guillermo Monsalve owned a sprawling ranch he couldn’t possibly afford, and conspired to hide it from them.

In a bombshell development, dealing a massive blow to the credibility of Senator Iván Cepeda and his sham legal case against former President Álvaro Uribe, federal and military authorities today raided a sprawling $123,000 ranch on 50 acres of Colombian farmland, affirming it was secretly owned by Cepeda’s star witness – Juan Guillermo Monsalve.

Officials confirmed that there was no way Monsalve or his family could have possibly acquired the asset with their own money, and could apparently only have obtained it through “criminal acts”.

The legal case driven by Cepeda against Uribe, which has never produced any charges or material evidence, rests entirely on the testimony by Monsalve, currently serving a prison sentence for kidnapping, extortion and other crimes.  But on August 24, when cross examined under oath for the first time in the case, it was confirmed that Monsalve lied on at least eight separate occasions in his testimony to the Supreme Court of Justice in the testimony that Cepeda induced.

Investigative journalists discovered the Monsalve ranch on September 7, one month after Uribe’s arrest without charge.  “I don’t know how Monsalve got the ranch,” Cepeda said after the revelation, struggling to explain a suspicious real estate transaction closed on the ranch by Monsalve’s wife in June 2018, shortly after Monsalve delivered the induced testimony against Uribe to Cepeda’s case.  Another witness close to Monsalve, Enrique Pardo Hasche, came forward to say he knew the ranch was a “gift” to Monsalve in exchange for false testimony against Uribe.

Cepeda has insisted he didn’t arrange for cash support for Monsalve through an allied political NGO, the Solidarity Committee for Political Prisoners, simply “put Monsalve in contact” with them.  But Monsalve is not a political prisoner.  How did Monsalve get special treatment from this Cepeda-connected NGO?  Are there other payments yet to be discovered by authorities?

Troubling questions for a politically driven case that is collapsing around Iván Cepeda.  Today’s raid brings Colombia another step closer to answers.