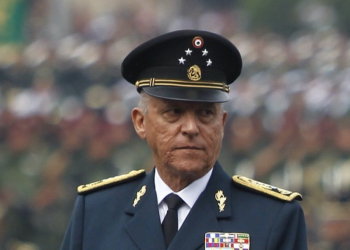 There is one element that has proven vital to the operational success of international drug trafficking organizations the world over, including Latin America: collusion from corrupt government officials to safeguard shipments and avoid interdiction.

Over the years, a number of high-profile cases have illustrated the extent to which security officials have fallen on the wrong side of the law and involved themselves with organized crime groups.

The idea of a conventional battle being waged between two autonomous actors — the government on one side and criminal groups on the other — is far from the truth. Officials and criminals interact much more frequently, relying on one another to negotiate the conditions that regulate order and violence to their mutual benefit.

Below, InSight Crime looks at five cases — by no means an exhaustive list — of alleged official collusion between drug trafficking groups and government officials in Latin America. When former President Felipe Calderón decided the government would launch an official crackdown on organized crime in 2006, Genaro García Luna was on the front lines as his secretary of public security from that point on until 2012.

However, US prosecutors allege that the former top cop was playing for the other side, accepting millions of dollars in bribes from the Sinaloa Cartel in exchange for protecting their drug shipments and steering law enforcement away from their criminal activities, according to a December 2019 indictment.

García Luna has denied the charges. But in an October 2 letter, prosecutors said they had “189,000 pages of documents, as well as voluminous intercepted communications,” to support allegations he “betrayed those he was sworn to protect” by working alongside members of the Sinaloa Cartel to facilitate their criminal enterprise over the course of nearly two decades, before and during his time as the country’s top security chief.

Following his arrest, two high-ranking officers who worked under him — Luis Cárdenas Palomino and Ramón Pequeño García — were also indicted on drug trafficking charges. Prosecutors say the three helped the Sinaloa Cartel traffic more than 50,000 kilograms of cocaine into the United States since as far back as 2001, according to a July 2020 superseding indictment.

García Luna has pleaded not guilty to the criminal charges against him but could face a maximum sentence of life behind bars. But instead of working to upend the operations of organized crime groups, US officials say he was actually assisting the so-called “H-2 Cartel” — what law enforcement has coined the network that emerged from the Beltrán Leyva Organization, once allies of the Sinaloa Cartel, that was led by Juan Francisco Patrón Sánchez. The former official had even taken on the alias of “El Padrino,” or the “Godfather,” according to an August 2019 indictment against him.

While Cienfuegos allegedly attacked rival organizations, secured maritime transport for drug loads and connected criminal leaders with other corrupt Mexican officials, prosecutors said in an October 16 letter that the Beltrán Leyva splinter group “conducted its criminal activity in Mexico without significant interference from the Mexican military and imported thousands of kilograms of cocaine, heroin, methamphetamine, and marijuana into the United States.”

Intercepts of “thousands” of Blackberry messages are among the evidence prosecutors allegedly have to back up allegations that Cienfuegos gave the criminal group free reign to operate unobstructed in Mexico in exchange for tens of millions of dollars in bribes.

It remains to be seen how his trial will proceed, but Cienfuegos is facing between a 10-year minimum and a maximum life sentence in prison. While members of the military are rarely, if ever, arrested and successfully prosecuted for working hand in hand with drug traffickers, the case of Mexico’s former drug czar, Jesús Gutiérrez Rebollo, was an unusual exception.

Rebollo was arrested in 1997 on charges that he brokered a deal with arguably the country’s most prolific cocaine trafficker at that time, Amado Carrillo Fuentes, better known as the “Lord of the Skies,” to operate freely in exchange for hefty bribes.

The former head of the country’s federal drug agency — and one of the first top-level Mexican officials to be captured for colluding with drug traffickers — was eventually convicted and sentenced to 40 years in prison for drug trafficking, corruption and other charges. He later died in 2013 at a military hospital in Mexico City. Not even allegations of being part of a death squad that disappeared and executed members of Honduras’ infamous street gangs could stop Juan Carlos Bonilla Valladares, also known as “El Tigre,” from rising to become the country’s police chief in 2012.

He was quickly removed from the post in 2013, and by April 2020, US prosecutors had accused Bonilla of abusing the high-level positions he occupied in Honduran law enforcement between 2003 and 2018 to “flout the law and play a key role in a violent international drug trafficking conspiracy,” according to his criminal complaint.

Bonilla allegedly protected cocaine loads “on behalf of” President Juan Orlando Hernández and his brother, Tony, a former congressman who was convicted on drug charges in October 2019. In essence, Tony used his brother’s political ascent while relying on presumably corrupt security officials like Bonilla to run an international cocaine trafficking ring for upwards of a decade.

By ensuring the National Police did not stop vehicles filled with cocaine and by providing sensitive information about law enforcement’s aerial and maritime operations to the network, prosecutors allege Bonilla became so “highly trusted” that President Hernández and his brother Tony also tasked him with “special assignments, including murders.”

Bonilla has not yet been arrested and has flatly rejected the charges against him. During the administration of former Guatemala President Otto Pérez Molina (2012-2015), Mauricio López Bonilla amassed considerable power as interior minister. He became a formidable figure that the US government frequently connected with to help spearhead its “war on drugs” in the region.

However, US authorities eventually indicted the war veteran and former head of the country’s police force in February 2017 — during which time he was already under investigation for corruption and money laundering in Guatemala — for allegedly trafficking cocaine into the United States between 2010 and 2015, according to his indictment.

As part of the extradition request US authorities sent to their counterparts in Guatemala, the local media organization El Periódico reported that López Bonilla allegedly “ordered National Police officials to escort shipments of cocaine and reassigned personnel from that institution at the request of drug trafficking organizations in exchange for bribes.”

A year earlier, in 2016, InSight Crime published an investigation that uncovered possible ties between López Bonilla and the notorious drug trafficker Marllory Chacón Rossell. Sometimes called “The Queen of the South,” the US Treasury Department had in 2012 also identified Chacón as one of Guatemala’s “most active” money launderers. She later went on to cooperate with authorities in exchange for a deal that saw her leave jail early.

In Guatemala, Chacón had allegedly invested in a private security company connected to the former minister in exchange for official protection. López Bonilla has long denied any allegations of his ties to drug trafficking, and has yet to be extradited to the United States to face the charges against him.