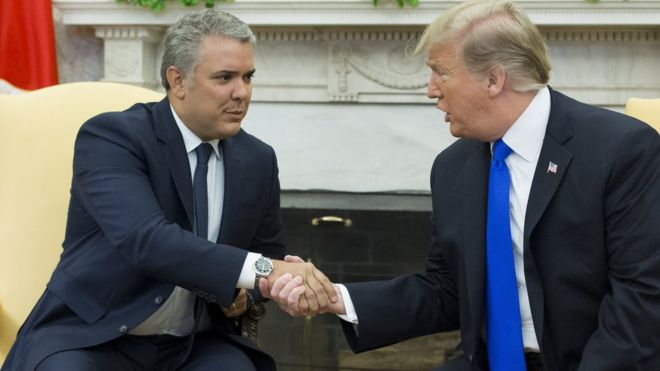 Colombia will have to resume aerial spraying to destroy coca crops, US President Donald Trump has said.

Mr Trump made the remarks at a joint press conference with Colombian President Ivan Duque in Washington.

Aerial spraying of crops was suspended in 2015 after a court ruled that the herbicide used – glyphosate – could cause cancer and pollute land.

«Well, you’re going to have to spray. If you don’t spray, you’re not going to get rid of them. So you have to spray, with regard to the drugs in Colombia,» the US president told Mr Duque.

Mr Duque said that the country would «combine all the options available» in order to combat the problem, including the manual destruction of crops.

A recent UN report said the amount of agricultural land used for coca crops in Colombia had hit record levels.

The country has fought for years to tackle cocaine production, with the US providing about $400m annually to help combat the producers and traffickers.

The UN Office on Drugs and Crime (UNODC) issued statistics in September that showed coca production acreage in Colombia in 2017 was the highest ever recorded.

The UN said the region bordering the Pacific Ocean in Colombia was the most intensively cultivated.

On its own, the state of Nariño on the frontier with Ecuador has more farmland dedicated to coca than the whole of Peru.

Eighty per cent of the coca has been grown in the same region for the past decade, while crops produce 33% more coca leaf than they did in 2012, the report said.

In August 2019, President Duque said the government would create a new drug-fighting policy, saying the aim was to have «concrete results» in the next four years.