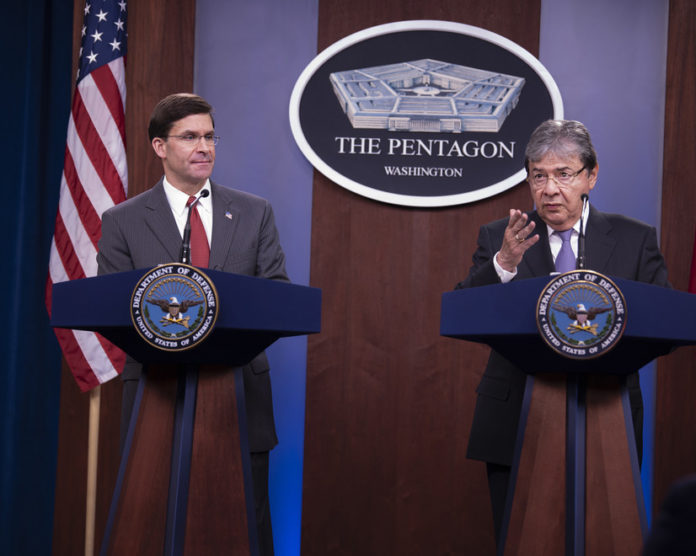 Defense Secretary Dr. Mark T. Esper said Colombia is the United States’ «closest partner in Latin America,» and that he looks forward to strengthening their defense relationship even more.

Afterward, the two held a press briefing to discuss areas of cooperation between the two nations.

The two nations share a long and rich history of cooperation around the world, Esper mentioned, including during the Korean War when Colombia deployed troops in support of the United Nation-led military effort to protect South Korea.

Colombia has also participated for decades in the multinational force and observers who are keeping the peace in Egypt’s Sinai Peninsula, Esper noted.

Last week, the defense relationship was on display when Colombia hosted a joint army airborne exercise, he added.

Esper said he and Trujillo will be discussing more opportunities for multilateral exercises in the region in the future.

Key to security in the region is resolving the crisis in Venezuela, where the Nicolas Maduro regime continues to violate the human rights of its own people, the secretary said.

The U.S. and other nations are seeking a peaceful transition to democracy in Venezuela, he said.

«We are grateful for everything Colombia has done to assist Venezuelans fleeing Maduro’s oppression,» Esper said.

In other areas, the U.S. is working with Colombia to curb cocaine production and trafficking. Last year, there was an increase in the eradication of illicit drugs, Esper noted. He said the pace of that work continues this year.

This week, Esper said he met with leaders of the U.S. Coast Guard to discuss ways they and the Defense Department can aid Colombia and other nations in counter-narcotics activity.

Esper congratulated Trujillo and Colombia for becoming NATO’s first Latin American global partner in 2018. «This was a critical step toward improving your interoperability with the alliance and increasing your participation in exercises and military education. Meanwhile, NATO will greatly benefit from your experiences in counterterrorism and other military activities.»

Trujillo thanked U.S. and Colombian service members and police for putting their lives on the line. «They are all heroes, and we owe them our eternal gratitude for providing the security that allows us to build and maintain our nations’ democratic values, freedom and human rights.»

«The United States is Colombia’s most important and strategic partner,» the defense minister said. «The bilateral Colombia-U.S. relationship has historically been characterized by strong ties of friendship and cooperation on many fronts.»

Trujillo said he shares with the U.S. the hope for a rapid transition to democracy in Venezuela, eradication of illicit crops and ending terrorism. He added that he looks forward to even more cooperation between the two nations’ militaries.