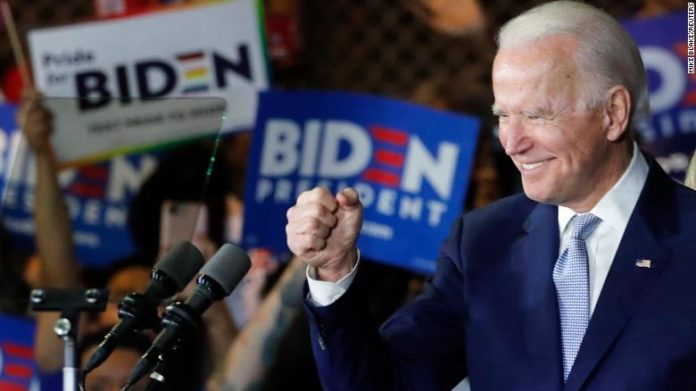 Joe Biden cemented a remarkable comeback on the biggest primary night of the Democratic presidential campaign with victories in nine states across the country, including upsets in Texas and Massachusetts, even as Bernie Sanders took the biggest prize of the night, California.

Biden, whose campaign was faltering just days ago, scored wins in Virginia, North Carolina, Arkansas, Oklahoma, Tennessee, Alabama and Minnesota. His victories in Texas and Massachusetts were especially stinging for Sanders, who had supplanted Biden at the top of polls in recent weeks.

“Just a few days ago the press and the pundits had declared the campaign dead,” Biden told supporters in Los Angeles. “I’m here to report, we are very much alive.

Along with California, Sanders picked up wins in Colorado, Utah and his home state of Vermont.

Maine was the only one of the 14 Super Tuesday states that remained too close to call.

It was another disappointing night for Senator Elizabeth Warren who could do no better than third in any state — including her home of Massachusetts. Former New York Mayor Michael Bloomberg picked up delegates in several states — including California — but he barely made a mark in the race despite spending more than $600 million. Both will confront questions on Wednesday about whether they will continue in the race.

Biden’s victories were built off his decisive win on Saturday in South Carolina, which followed campaign stumbles and disappointing results in the first three contests of the nomination race.

Democratic Party leaders and centrist voters rallied around Biden as the moderate alternative to Sanders, a self-described democratic socialist who is seen by many as too far left to defeat President Donald Trump in November and help Democrats in Congress. Pete Buttigieg and Amy Klobuchar, who were competing with Biden for moderate voters, fell in line by dropping out and endorsing the former vice president.

Television network exit polls showed around 30% of voters in Super Tuesday states made their pick in “the last few days.” The late deciders overwhelmingly favored Biden: 47% chose the former vice president, compared to 21% for Sanders, 14% for Warren and 11% for Bloomberg.

Biden also had an advantage with African-American voters, who make up a sizable portion of the Democratic electorate in Alabama, North Carolina, Tennessee, Virginia and Arkansas. He won 63% of the black vote in Virginia and North Carolina, according to network exit polls reported by CNN.

That suppport will help later in the month when major caches of delegates will be available in primaries in Michigan, Florida, Illinois and Ohio.

Still, the Democratic nomination race has been marked by twists and turns, and there may yet be drama ahead if neither Biden nor Sanders can win a clear majority of delegates in the remaining contests. If that’s the case, the chances of a contested convention – a political occurrence unseen in almost 70 years – will soar, further emboldening the incumbent president and diminishing the odds of a successful opposition challenge.

Sanders said he remains confident that he will prevail and win the nomination. He argues that the country is hungry for a “political revolution,” and that he has drawn in a diverse base with promises of free health care, free housing, free college tuition and free child care, as well as plans to levy steep taxes on the wealthy and corporations.

“We’re going to win because the people understand our campaign, our movement is best-positioned to defeat Donald Trump,” Sanders told supporters at a rally in Vermont.

Sanders and Biden headed into the night close in delegate tallies. Sanders emerged from the first four contests with 60 delegates, but Biden’s big win in South Carolina on Saturday brought him within six delegates of his chief rival. The final allocations of the 1,357 delegates available on Super Tuesday — one third of the total — might not be known for days as officials sort results at both the state and district level.

Warren and Bloomberg had previously indicated they planned to stay in the race, although party leaders are increasing pressure on them to drop out to clear the way for Biden.

Bloomberg’s campaign said it would look at how he had done over the course of the night.

The stakes couldn’t be higher for a party that’s still reeling from Trump’s 2016 victory and is weighing diametrically opposite approaches to winning back the blue-collar, working-class voters along the Rust Belt that had long served as its electoral firewall — Biden’s centrist vision or Sanders’s populist one.