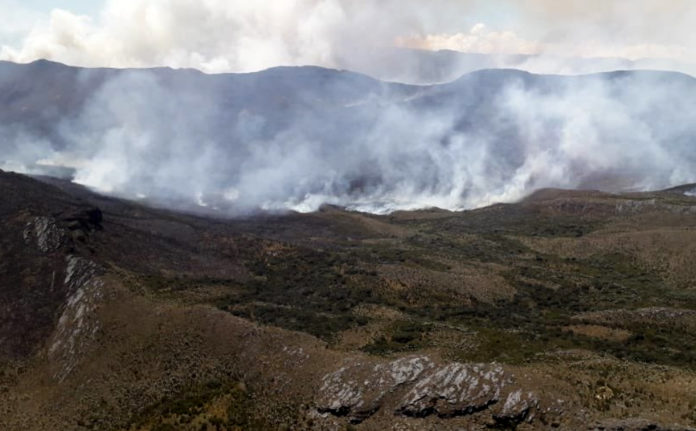 Members of the Bogotá Fire Department are attempting to control three wildfires blazing out of control near the departmental border of Cundinamarca and Meta. The fires are located in a sector of the Sumpaz mountain range known as San Luis Cubarral and have consumed since Thursday 30-square kilometers of high-altitude wetland.

Bomberos de Bogotá has dispatched to San Luis Cubarral, 30 firefighters and helicopters with Bambi Buckets are expected to arrive on Friday. The emergency response is being coordinated with the country’s Disaster Risk Management Agency (UNGRD).

On Wednesday, Colombia’s National Parks entity (Parque Nacionales) confirmed a wildfire within the limits of the Sumapaz National Park, close to the municipality of Guamal, Meta.

Sumapaz was declared a National Park in 1977 and covers an area of 221,000 hectares. The park also accounts for 43% of the total high altitude wetland in the world, and fragile habitat for deer, Andean condor, spectacled bears, armadillo and many other endangered species. The wetlands are also known for their towering frailejón (espeletia) plants.

The department of Cundinamarca has registered 61 fires since the start of the year.

Donation from CNE Oil & Gas did not go to Duque’s for President campaign: Echeverri

Donation from CNE Oil & Gas did not go to Duque’s for President campaign:...

Donation from CNE Oil & Gas did not go to Duque’s...

Which country has flattened the curve for the Coronavirus?

As wildfires burn in Sumapaz, Bogotá’s pollution at hazardous levels