An arrested policeman is accused of being a ringleader of the border branch of “Los Rastrojos,” the group that helped Venezuela’s opposition leader Juan Guaido into Colombia last year.

Cucuta Police Department officer Sthevenson Sanchez was arrested last week after he was filmed claiming to be the extortion chief of the Rastrojos ring that is active in the area around the capital of Norte de Santander on both sides of the border. 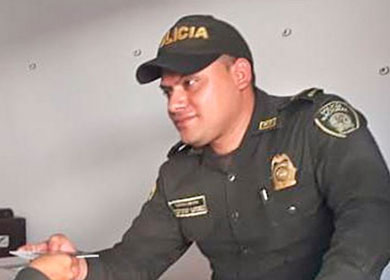 The Prosecutor General’s Office told news agency Colprensa that in a video, “he claimed to be the head of the collection office of organized crime group the Rastrojos in Norte de Santander, while demanding 50 million from one person and threatening the family.”

While being a member of the Cucuta Police Department, Sanchez was not just actively involved in extortion and kidnapping, but also the assistant CFO of the regional branch of the organized crime group, investigators told local newspaper La Opinion.

The National Police’s intelligence unit DIJIN believes that the police officer has been a member of the Rastrojos for at least six years, according to the Cucuta daily.

The policeman’s ring of the Cali-based Rastrojos made the headlines in September last year when photos emerged of Venezuelan opposition leader Juan Guaido posing with members of the same ring in Puerto Santander, a municipality just north of Cucuta.

The Cucuta Police Department was accused of being complicit in the 2018 assassination attempt of opposition Senator Gustavo Petro while visiting the city whose former mayor Ramiro Suarez is in prison partly thanks to Petro’s evidence of the politician’s ties to organized crime.

The Rastrojos formed in the first years of the century as the main successor group of the Norte del Valle cartel and paramilitary organization AUC.

The Rastrojos lost much of their territorial control in a war with AUC dissident group AGC over the past decade, however, but has maintained strong in the area around Cucuta.