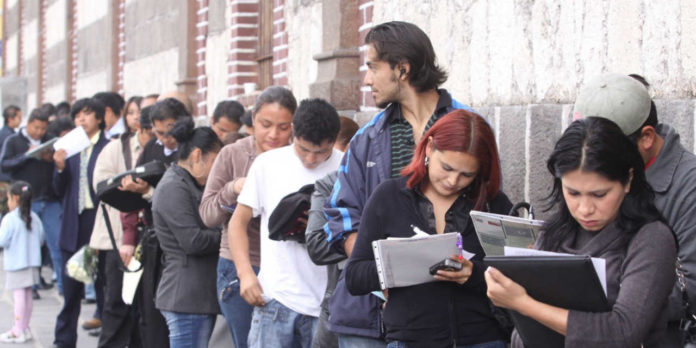 Colombia’s unemployment rate that has been increasing since 2015 accelerated and reached 10.5% in 2019, but some experts believe there is light at the end of the tunnel.

The hike in unemployment followed a drop in global commodity prices in 2014 and the subsequent mass migration from neighboring Venezuela, which was hit hardest by the price drop in the region.

The almost unstoppable unemployment hike is by far Colombians’ biggest concern, especially because it has accelerated since President Ivan Duque took office.

The Duque administration has been trying to show results, despite its evident failing economic policies that would generate employment.

This time, however, Duque’s optimism is backed by statistics that allow some to carefully share some optimism.

Juan Daniel Oviedo, the chief of statistics agency DANE recognized that the 0.7 percentage point increase was an acceleration compared to the 0.4 registered between 2017 and 2018, but nowhere near the 1.6 points he registered in April and the 1.2 in August.

“It seems that there is now an improving trend in unemployment figures, probably associated with increased economic activity,’ Mejia told El Tiempo, the newspaper of Duque’s political patron.

Others were less optimistic, claiming Duque’s focus was on strengthening economic sectors like the agro-industry that may grow the country’s GDP, but do not generate jobs.

“The economic growth that has been taking place is generated by sectors that are not strong in creating a demand for labor,” Economy professor Andres Giraldo of the Javeriana University told Noticias Uno.

The endless debate with a Venezuelan twist

The endless debate is about how to grow the economy in a way that it generates jobs and domestic consumption that in turn would fuel further economic growth.

Foreign investment plummeted more than 70% in the first three quarters of last year compared to the same period in 2018. Exports were also down 6%.

The labor debate is further complicated by the mass influx of undocumented Venezuelan migrants who are massively and illegally exploited by employers at the cost of formal employment for Colombians.

Not surprisingly, DANE registered a lower unemployment among Venezuelans who have been in Colombia for more than 12 months rate than among Colombians.

This has not just fueled xenophobia, but also tensions between employer who want to also reduce the cost for Colombians’ labor and lower and middle class workers who can’t make a living wage if they can get a job.

Colombians, however, are fed up with what they consider ineffective economic policies and deteriorating labor conditions; it’s why hundreds of thousands took part in the largest anti-government protests in November.