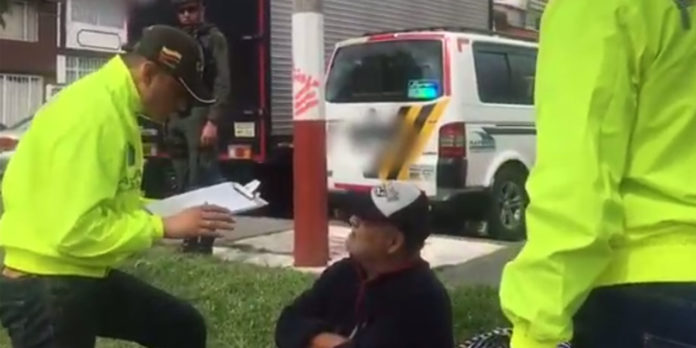 Colombia’s prosecution arrested the former hostage chief of demobilized guerrilla group FARC on Saturday, claiming he was involved in a 2017 kidnapping.

According to the prosecution, Sombra and former FARC mid-level commander “Kafir” were involved in the kidnapping of a rancher in the southern Caqueta province in December 2017, six months after the former FARC commander was released.

The prosecution presented no evidence to support the criminal charges that were never made public until after a confusing firefight in which Kafir allegedly was injured by police.

Because Sombra taking part in a peace process, the criminal charges could cause a conflict with the war crimes tribunal that wants the FARC’s former “prison guard” to respond for his prominent role in the FARC’s kidnapping practices.

Media reports contradict each other about whether Kafir would have abandoned the peace process to join a dissident FARC group or not.

Sombra told newspaper El Tiempo that Kafir invited him to visit a farm in the Tolima province to discuss business Saturday last week.

While inside having lunch, the former FARC commander said he saw armed men approaching and a firefight broke out.

Sombra said he left the house after the shooting stopped, identified himself as a demobilized guerrilla and his companion as a member of the National Protection Unit.

Tolima Police commander Colonel Rodolfo Carrera told newspaper El Espectador that they were called to the site by a woman who claimed armed men were on her farm apparently trying to displace her.

On arrival, the police were being shot after which they responded fire. According to Carrera, weapons found at the site indicated Kafir had armed company. The alleged FARC dissident, who is now missing, allegedly was injured in the shooting.

Contradicting the demobilized FARC leader, Carrera said that Sombra and his bodyguard were hiding in their car.

Both were taken into custody after which they were released and returned to Bogota where the former FARC leader lives.

Sombra told media he believed Kafir had lured him into a trap and had requested increased protection.

The former FARC leader was arrested in Bogota on Saturday on claims there was an arrest warrant against him for his alleged involvement in the kidnapping of a rancher in the southern Caqueta province in December 2017.

Visibly surprised by the criminal charges, the elderly former FARC leader surrendered to the heavily armed policemen without resistance and was taken into custody.

The Prosecutor General’s Office later told press that Sombra had been arrested because Kafir and he allegedly conspired to extort the family of a rancher who was kidnapped in San Vicente del Caguan in December 2017 and continues to be missing.

The FARC’s former hostage chief was initially arrested in 2008 and release as part of the peace agreement with his former group in June 2017.

According to Sombra, there is bad blood between him and his former fellow-guerrilla commanders because of his cooperation with justice previous to the peace deal.

The FARC did not respond to the arrest of the former rebel leader.