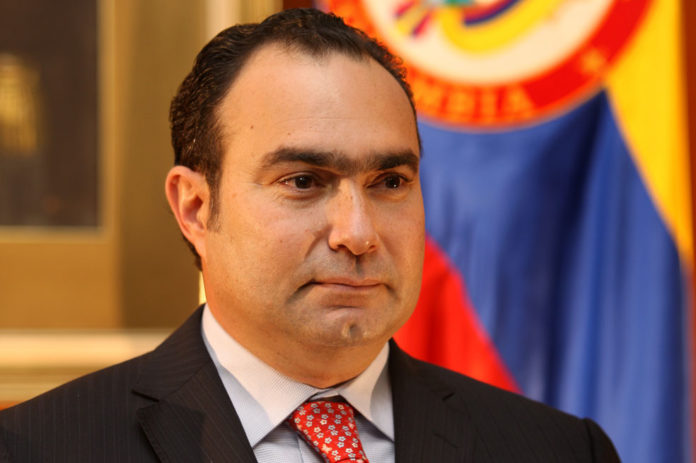 Former judge Jorge Pretelt speaks for the first time after the first instance court ruling. He Claims that his conviction , now in the application for nullity, is full of irregularities. He Claims that he is being charged because of his oppose to the peace process.

Jorge Pretelt is the protagonist of the first corruption case that shook the Constitutional Court. The trial chamber of the supreme court found the former judge responsible for the crime of concussion. He is reported to have asked the “Fidupetrol”, through the lawyer Víctor Pacheco, 500 million pesos to favor it in the process of a guardianship. Pretelt appealed his sentence of 6.5 years in prison.

Luis Carlos Vélez: How is your process doing?
Jorge Ignacio Pretelt: Last week we presented nullity to the trial presented by judges Ramiro Marín and Ariel Torres to the first instance.

L.C.V .: On what bases is this request for nullity ?
J.I.P .: It is a sentence that grotesquely contradicts the proven truth. It’s embarrassing what these two magistrates did. It should be noted that for a year and a half the Criminal Chamber of the Supreme Court heard my version, but, as the double instance entered into force, that process passed to the Trial Chamber, and these two judges handed-down the sentence without wanting to hear me .
L.C.V .: Why you where not heard ?
J.I.P .: There is a principle that must be respected which is that of immediacy. I was heard by the criminal chamber of the Supreme Court, but in view of the fact that this chamber considered that I should be guaranteed the double hearing, it went to the Trial Chamber. Although they must of have listen to me there, they did not. It is not the same, by virtue of that principle of immediacy, to refer to facts in a file that are facing out face to face with the accused and with the defendant.
L.C.V .: The first instance conviction says that six of the nine court judges testified that you, in a Full Chamber, claimed to have met with Victor Pacheco in your apartment. This is the almond of the case!
J.I.P .: That is not true. María Victoria Calle, who replaced me in the presidency of the court, tried to prefabricate a test and demonstrated with four judges in the court room on March 2, 2015 that I had acknowledge that Pacheco had been in my apartment. It is important for the country to know that today this act remains in the Constitutional Court without any signature, without validity. That is a totally false document.
L.C.V .: Why would María Victoria Calle would want to manufactured montage against you?
J.I.P .:lTheirs a political persecution for my ideological positions. There is a group of several judges who, since I came to court, persuade persecution. One of the biggest clashes with my colleague was a sentence that I made about pensions. They expected to retire at the time with more than 35 million per month. Thanks to that ruling, today nobody can have a pension of more than 25 minimum wages in Colombia. Then came other thick topics. I was the rapporteur of the legal framework for peace and in that judgement very important things were said, which was endorsed by the Constitutional Court at first, but which than gradually where shattered. It was established that the demobilized guerrillas in order to get to Congress must pay real and effective penalties, and that one of the prerequisite to access the agreement was to surrender and delink all minors. there were clashes and other issues. In this country it became a problem to have positions like disagreeing with abortion or same-sex marriage.

L.C.V .: Why are all those involved in your trial convicted and you claim to be innocent?
J.I.P .: I was also convicted in the first instance, but it is a grotesque sentence full of falsehoods. Mr. Pacheco is condemned not for my accusation, but for dealing influences in the selection of the guardianship in which I had nothing to do with . The selection was made by Jorge Iván Palacio and Alberto Rojas. Mr. Hélber Otero and Abel Guillermo Caballero are also convicted of trading in influences in the selection of guardianship. What I am accused of is that in my apartment, on October 18, 2013, I made a request for money for a third party and some gifts for the ex-judge of another magistrate and for his son. The others involved are convicted of trading influences in the selection of guardianship and I had nothing to do with it.
L.C.V .: Why would the Judges not have taken these testimonies into account?
J.I.P .: They did it maliciously. There’s another thing; My son was called to testify in the process and told the court that he had been at the” El Nogal Club” the day I allegedly met with Pacheco in my apartment. The judges say without proof that my son was not in “El Nogal”, and that since he was not there, the driver’s entrance did not correspond to his entrance, but to mine, and that, therefore, I had had time to go from the Cut to the apartment and meet with Pacheco. It is proven that Pacheco was not in my apartment. It has been proven that I was at the “El Nogal” Club with all my security scheme, and that is unknown to the sentence. They are condemning me because a man says that I asked him for money and gifts for third parties with a version that has more than 15 contradictions. And without attending to the testimonies that deny it.
LCV: How is the episode of the appearance of a note in a hotel in Panama, in which the president of Inasa would have written his last name and Rodrigo Escobar next to a figure of 650, which some say would correspond to millions of pesos in bribes?
J.I.P .: That is a novel. News was reported here that my wife was supposedly a land shedder. Everyone in the national government had the opinion that my fingers were stained with blood, and at six months the then deputy prosecutor, Jaime Camacho, filed the process and they were not able to make a rectification. These accusations are born of Senator Julián Bedoya, who said he was a lawyer and today I see that he has serious problems with his law degree.
L.C.V .: What does the former Eduardo Montealegre have to do with this story of dispossession?
J.I.P .: The investigation was initiated by him, but the process was filed within six months and it was said that there was no sign of dispossession of the Pretelt family. The serious thing here was the criminal complaint for crimes against humanity of Mr. Montealegre to my wife. Montealegre was waiting for me to resign from the presidency of the court. That was the year of Juan Manuel Santos’s agreements with the Farc and being president of the court it was my turn to moderate all the debates. As I said, I was the rapporteur of the legal framework for peace, and if it had been applied as I structured , the country would not be as polarized as it is today.
L.C.V .: Would you say that Juan Manuel Santos is behind the proceedings ?
J.I.P .: Of course. He, former Montealegre prosecutor, former Perdomo prosecutor and some Judges. It is inconceivable that the highest court in Colombia will condemn me by concussion without taking into account testimonies granted under the gravity of the oath. This is a case that should not have happened to the Accusation Commission. For example, the driver who transported Mr. Víctor Pacheco is called Peter Nieto. He went to the Supreme Court and said he had transported Mr. Víctor Pacheco on October 18, 2013 to the center and from the center to the Walnut. He never talked about taking him to my apartment or picking him up anywhere else. How is it possible that the Trial Chamber says that I was not in “El Nogal” at twelve noon if all my security scheme was there? Why is that ignored?
L.C.V .: But that is very serious!your statements suggest that you are been attack for being against the peace agreement …
J.I.P .: That is what they did with me. To be understood, the complaint of Víctor Pacheco with Luis Ernesto Vargas occurs on February 3 at five in the afternoon, and I am elected president of the court on February 4 at nine in the morning. From that moment, I began to make discussions with the Pacheco theme. He denounces on February 3, 2015 an episode that happened on October 18, 2013, that is, three years ago. I did not select the guardianship, I voted against the interests of Fidupetrol. Pacheco said that I asked for money to Rodrigo Escobar and some gifts for the ex-judge González. That was an invention of Mr. Luis Ernesto Vargas to indispose me with the vote of Judge Gonzalez to the presidency of the court. And besides, this was not free. Luis Ernesto Vargas was paid by the Government of former President Santos in a position in the Inter-American Commission on Human Rights; and Jorge Iván Palacio, when leaving the court, was filled with money pockets. This was a persecution to get me out and defend the peace process.
the conditions that had been established in my presentation on the legal framework for peace.
|

L.C.V .: Many say that your power is so big that you do not allow any subject to advance. What is your response?
J.I.P .: All I want is for this cases to be solved. I already have five years with these problems; they accused my wife of stripper; They said that my son, who begins his life as a legal professional in Colombia, lied. I am the most interested in getting out of this, but what do we do with a shameful Trial from a high court in Colombia. I hope that this Trial is declared void because it contains falsehoods.
L.C.V .: Considering everything you told us, do you consider asking the JEP to allowed you in ?
J.I.P .: It is a matter typical of ordinary justice. Although on one occasion in the midst of this persecution, Álvaro Leyva told me that my problem was my opposition to the peace process.