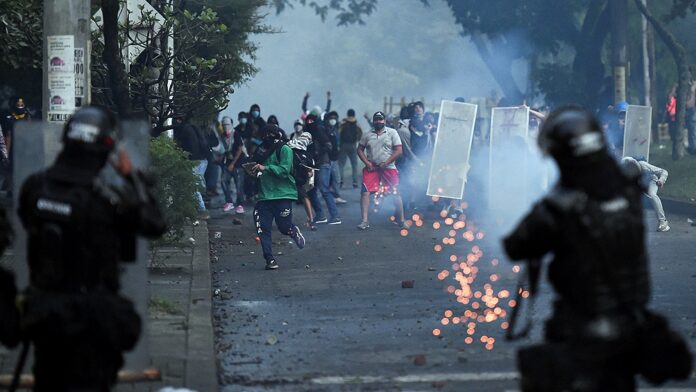 Instructors have been delivering online courses across the world from the force’s new international academy at the Scottish Police College.

Senior officers say the facility will export their «human rights based approach» to policing.

Since April dozens have died in Colombia following clashes between protesters and security forces.

Police Scotland say the courses, based at Tulliallan in Kincardine, Fife, will also focus on community engagement.

In the training with Colombian officers, the force highlighted its policing of the recent protest in Kenmure Street in Glasgow, where demonstrators prevented immigration officials from taking two Indian men into detention.

Police Scotland ended the stand off peacefully by releasing the two men back into the community and asking the crowd to disperse.

The force has been criticised in the past for working with police from Sri Lanka but argues that doing so has a positive influence.

The academy was officially opened by First Minister Nicola Sturgeon, who said: «This work is not about endorsing bad policing practises in other countries, it’s about Police Scotland taking their human rights based approach to policing and spreading that around the world.»

Officers from the force have also been deployed to Malawi, which has close ties to Scotland, where they advised police on the investigation of sexual offences.

Insp Craig Rankine said: «Safety issues for young girls was the thing that kept coming back time and time again. Sexual assaults among the under -16s in Malawi were a particular issue and it was something that the Malawi police were keen to improve their approach and response to.

«We weren’t there to tell them what to do, we were there to help them deliver the programmes that they wanted to deliver and share good practise.»

De-escalation techniques developed in Scotland have also formed part of new training which is being rolled out by American police forces, including the New York Police Department.

The head of the academy Supt Helen Harrison said: «One of the key areas is about communication and the style of that communication.

«Not just running into a heated situation, but taking a moment, assessing and communicating and then trying to bring that tension down in a safe way for all involved.»