Uber restarted operations in Colombia on Thursday morning after shutting down its app for almost three weeks.

In a statement, the platform said it had found “new alternatives” to work legally in the country. 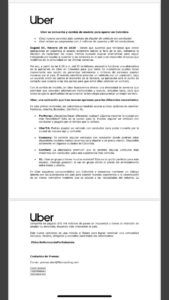 Uber said that from now on, its app will help users enter contracts with drivers in which they are “renting” the vehicles, along with the drivers’ services.

“It’s a mockery of the law,” said Ernesto Sandoval, general manager of Taxis Teleclub, a Bogota cab company. “You can’t provide public transport and say its a rental service,” he told the Caracol radio station.

Uber says that by the end of January, it had 2 million users in Colombia as well as 88,000 drivers working with the app, and sometimes relied on it for all of their income.

But Colombia’s Superintendency for Industry and Commerce ordered the app to shut down in December following a lawsuit by a taxi company. The superintendency said that Uber was providing transport in an “unregulated” fashion, and was diverting customers away from taxis that pay licensing fees.

Uber complied with the ruling but argued that it went against a free trade agreement between Colombia and the United States. The company also said the ruling was discriminatory as it only told Uber to cease operations, and did not address similar apps that also operate in Colombia, including Cabify, Didi and Beat.