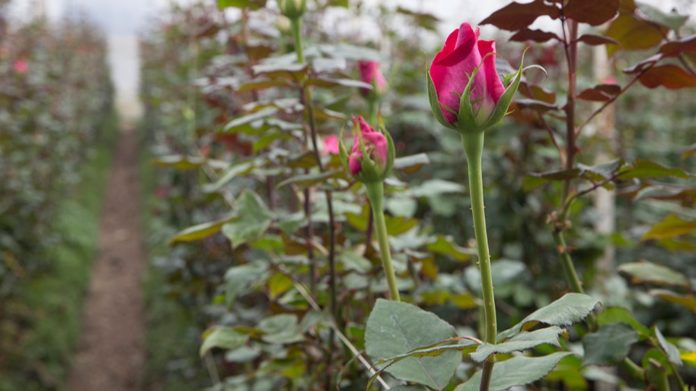 Rose farms in Colombia’s high-reaching savannas were all action weeks before Valentine’s Day.

Farmers wound through long rows of rose bushes, clipping deep red flowers and adding them to a large stack of roses swaddled in their arms like babies.

Men pushed carts brimming with boxes of red, pink, yellow and white blossoms out of giant greenhouses and into the hands of production teams.

Workers picked through the roses at a rapid pace, trimming, plucking, sorting and bundling each flower into luscious bouquets that in 48 hours would land in supermarkets across the United States.

For flower producers in the South American country, the holiday is less a day of love, and more a three-week sprint to the finish.

Colombia is the second-biggest exporter of flowers in the world, after the Netherlands. Cut flowers are one of the country’s biggest exports alongside coffee, petroleum, coal and precious materials.

This year, Colombia expects to export more than $1.5bn in flowers – about 660 million blossoms – according to data from Colombian Association of Flower Exporters (Asocolflores). The vast majority arrive in the US, Colombia’s biggest trade partner.

February 14, Valentine’s Day, is the most important day for Colombian flower growers like Fantasy Farms, a farm in the highlands near the country’s capital Bogota. The day alone makes up 20 percent of their annual sales, said Dora Chriva, director of operations at the farm.

“Right now, we say that we’re 24/7,” Chriva said, as flower farmers mill by. It is a crucial day for growers, though Colombian culture does not even celebrate the holiday.

“The Valentine’s Day celebration requires extra work,” Chriva said. “The volume of flowers that you have for this celebration occupies a bit more than your established schedule … We work really hard for nearly three weeks in production for the day of love.”

In the country with high unemployment and informal employment rates, the industry created 140,000 formal jobs for Colombians. On average, flower workers earn just a little over Colombia’s minimum wage, around $290 a month, however. Colombian President Ivan Duque said Tuesday that the country hopes to double flower exports to $3bn by 2030 by expanding to markets in Asia and Latin America.