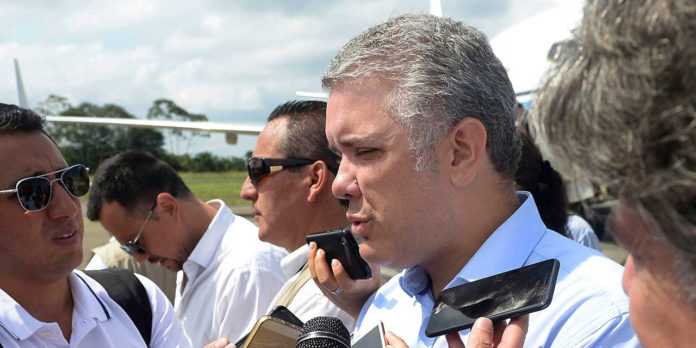 Colombia’s President Ivan Duque on Thursday rejected the offer on his Venezuelan counterpart Nicolas Maduro to reestablish consular relations between the two countries.

Venezuela’s authoritarian leader offered to reestablish consular ties on Wednesday after the arrest of a fugitive former Senator-elect of Duque’s minority coalition who, according to Maduro, “is telling everything about Colombia’s ruling class.”

Maduro offers to reestablish ties with Colombia, but warns Duque arrested ally ‘is telling everything.’

Caracas suffering “a sort of schizophrenia”

On Thursday, the president told press his Venezuelan counterpart was suffering “a sort of schizophrenia,” reminding reporters it was Maduro’s decision to break diplomatic ties.

Caracas broke off ties in February last year after Duque facilitated an attempt by opposition leader Juan Guaido to force American aid trucks across the border as part of opposition efforts to oust Maduro.

Duque’s refusal to “be pragmatic” comes as former Senator-elect Aida Merlano, who broke prison in October, is being interrogated by Venezuelan intelligence agency Cebin.

The Conservative Party politician was sentenced to 15 years in prison after she was convicted on election fraud charges.

Merlano is close to some of Duque’s most important allies and, according to Maduro, is “telling everything about Colombia’s ruling class.”

“I hope to make all these things public soon, but this could be arranged super quick if there was communication, if there was a relation,” Maduro said.

“Don’t come and make fun of the institutions and legality,” responded Duque, who became president in 2018 partially because of the support of all kinds of questionable and even criminal allies.

Merlano’s patrons reportedly are two powerful but controversial clans from the Caribbean coast who supported the president’s 2018 election campaign.

Maduro’s apparent plans to use the captured former politician to discredit Duque and his political allies could do more damage than anticipated by the president whose disapproval rating hit 70% in December.