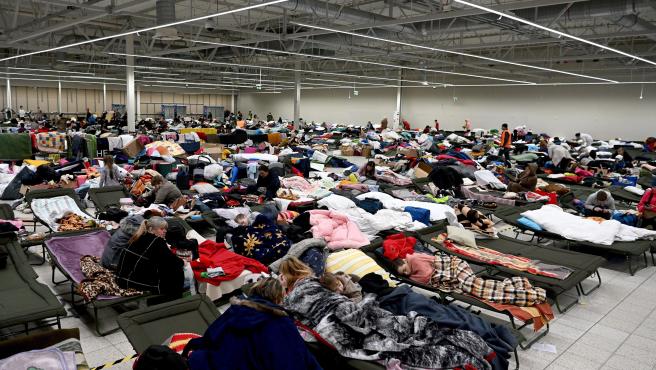 Although it is largely a coincidence of timing that Colombia’s president, Ivan Duque, will travel to Washington, D.C., this week to visit President Joe Biden, it is a propitious one, with the world watching the massive exodus of civilians from Ukraine seeking safe harbor.

Colombia has a lot to share with European countries as they begin to address the basic needs of refugees pouring over their borders and brace for the millions more likely to come, because Colombia has seen millions upon millions of desperate people fleeing the collapse of Venezuela since 2015. In fact, the vast majority of the 6 million Venezuelans forced out of their country found first refuge in Colombia, including the more than 2 million who have become part of Colombian society.

Rather than respond with nativism and overzealous border enforcement or buckle under the weight of such a large, displaced population, Colombia — across two quite different presidential administrations — rose to the challenge. And it did so without the outpouring of global support the refugee response in Europe will (and should) almost undoubtedly receive.

A critical component of the Colombian response is President Duque’s historic decision to provide 10-year legal status to nearly 1 million Venezuelans living in Colombia, providing stability and opportunity to an otherwise vulnerable population. It benefits not only the migrants but also the communities that have received them. Stabilized migrant populations are ones that can and do contribute more effectively to local economic growth, as has been seen time and again in Colombia, in the United States, and around the world.

Colombia is not alone in providing positive examples. Throughout the region, countries like Costa Rica, Peru, Ecuador, Chile and Mexico continue to effectively absorb large Venezuelan, Cuban, Nicaraguan and Haitian migrant populations, among others. But President Duque’s visit to Washington also serves as a reminder that far more needs to be done; the dislocation of people throughout the Americas is not a transient phenomenon, especially in the wake of the pandemic and as the climate crisis accelerates.

A common dislocation challenge means countries across the hemisphere need to come together to mitigate, manage and order migration. The long-term stability of democracies throughout the Americas demands it, as nativists and would-be authoritarians too often seek to use irregular migration and the sense of chaos it can engender to rally supporters and undermine democratic practices.

Critical to doing so is righting the economic ship throughout the Americas. Migrant-receiving communities in the Americas need far greater assistance than they have received to date. In Colombia alone, estimates indicate that providing for Venezuelan migrants has cost roughly 0.5 points of Colombia’s annual gross domestic product in each of the past six years. Although immigrants add to economic growth, those effects take longer to materialize and can be uneven, requiring support for receiving communities.

U.S. leadership is critical in spurring the countries of the Americas to effective, collective action. President Biden embraced the power of stabilizing displaced communities when he granted Venezuelans temporary protected status last year. Last November, the United States also provided critical backing to $800 million in direct budget support to Colombia for its regularization and integration program from the World Bank and the Inter-American Development Bank. Regularization and stabilization efforts to benefit migrant receiving communities need to be brought to scale throughout the Americas.

Doing so will root would-be migrants far more effectively than threatened border enforcement, especially in an environment where the once impenetrable Darien Gap yielded some 140,000 migrants in 2021. This approach would advance U.S. interests as well as those of Colombia’s neighbors, by relieving pressure on borders throughout the hemisphere. Simply put, rooting vulnerable populations by providing legal status and supporting receiving communities helps manage already historic migratory flows throughout the region and to the U.S.-Mexico border.

Even before Vladimir Putin’s invasion of Ukraine, forced displacement was at historic levels around the world. As Europe deals with a new mass migration and the Americas continue to seek better ways to mitigate, manage and order record migration, it will be critical to learn from one another. President Duque’s visit to Washington should help shine an important light on some best practices in providing protection to vulnerable migrants and to the communities receiving them — and, crucially, on the need to intensify efforts.