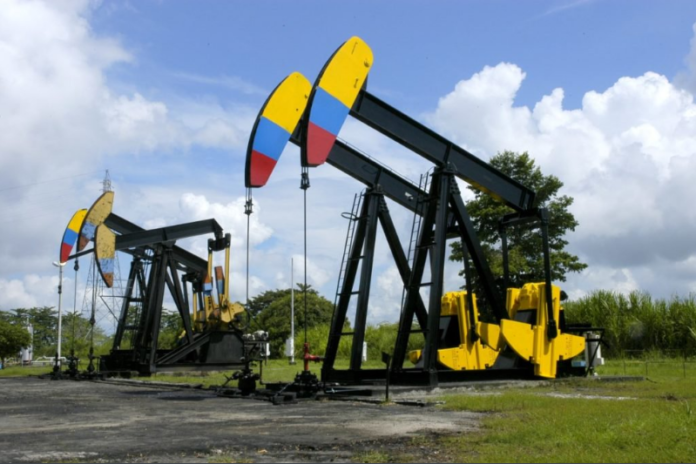 Colombia country is facing its worst economic catastrophe of modern times because of the global COVID-19 pandemic. The IMF believes that the strife-torn Latin American country’s economy will shrink by over 8% during 2020 with some analysts predicting that the contraction could be even worse predicting a 10% drop in gross domestic product. The threat of an extensive economic crisis and stalled recovery is heightened by low proven oil and natural gas reserves, a sustained oil price slump, weak investment inflows, and softer hydrocarbon production. For almost a decade, hydraulic fracturing has been positioned as a means of resolving many of the issues confronting Colombia’s hydrocarbon sector and petroleum-dependent economy. There are signs after nearly 10 years, fracking could become a reality for Colombia’s economically crucial oil industry. The controversial technique could resolve many of the risks faced by the industry and head-off Colombia’s emerging economic crisis. Data from the government statistics agency DANE (Spanish) points to a sharp economic contraction. After modest pre-pandemic first quarter 2020 GDP growth of 1.2% year over year, economic activity declined considerably with second-quarter GDP plunging almost 16% followed by a 9% third-quarter decline. According to DANE, Colombia´s GDP (Spanish) contracted by 8% year over year for the nine months ending 30 September 2020, indicating that the economic contraction may be worse than predicted by the IMF. This substantial unprecedented contraction caused unemployment to soar, peaking at 21.4% in May 2020 before falling to 14.7% for October. There are fears of worse ahead for a country that a decade earlier had emerged as one of Latin America’s economic success stories.

On a troubling note, soft first quarter 2020 GDP data and double-digit unemployment rate of 13% for January 2020 indicates Colombia’s economy was slowing before the global pandemic arrived. That can be blamed on the sustained oil price slump that commenced in August 2014. Despite having some of the lowest oil reserves, totaling just over 2 billion barrels, of any major oil-producing nation in Latin America, Colombia’s economy is highly dependent on petroleum. Prior to late-2014 crude oil was responsible for 57% of all exports by value, 4% of GDP and earning around a fifth of government revenue. Once the current oil price slump commenced Colombia’s economy came under significant pressure with the peso weakening, government revenue falling and growth declining to levels not seen since the 2009 Great Recession.

Sharply weaker oil prices are weighing on Colombia’s economy, investment inflows and oil as well as natural gas production. While the Andean country’s hydrocarbon sector has reactivated after one of the world’s lengthiest COVID-19 lockdowns, production is weak. By October 2020, Colombia was pumping an average of 751,374 barrels of crude oil daily which was 15% lower than a year earlier and well below the 2031 record high of 1,008,178 barrels daily. Natural gas production has also declined, falling almost 2% year over year to 1,091 million cubic feet daily. The Andean country’s average crude oil output for the first 10 months of 2020 reached 785,527 barrels daily while natural gas was 177,415 barrels of oil equivalent daily. This is well below the annual average of 885,863 barrels of oil and 184,675 barrels-equivalent of natural gas daily pumped during 2019, which was the highest level of production since 2015. 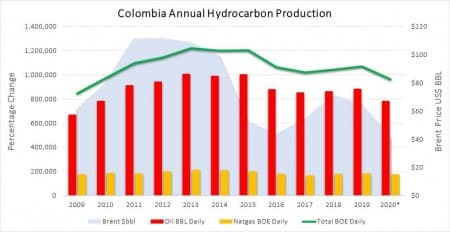 Source: Colombia Ministry of Mines and Energy and U.S. EIA.

The economic threat posed by Colombia’s low oil and natural gas reserves is immense. Latin America’s third-largest oil producer only has proven reserves (Spanish) of just over 2 billion barrels of oil and 3.1 trillion cubic feet of natural gas with a production life of 6 years and 8 years, respectively. There have been no major onshore conventional hydrocarbon finds in Colombia since 2009. The economy’s dependence on petroleum is highlighted by the Andean country’s GDP expanding by an impressive 5.1% for 2013 when oil production hit a record high of just over 1 million barrels daily. During that year, the international oil price benchmark Brent averaged $108.56 a barrel or more than double its current market price. By 2017 when Brent averaged $54.25 per barrel and oil output had softened to an average 853,578 barrels daily, GDP grew by an unremarkable 1.4% or less than a third of the rate experienced four years earlier. 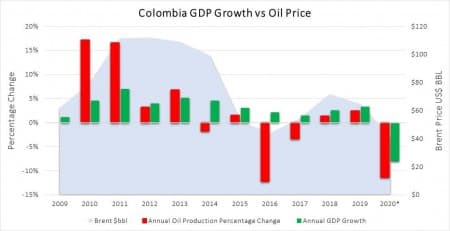 Sharply weaker oil prices coupled with diminishing oil output led to sharp budget cuts, higher deficits and growing sovereign debt. The economic crisis emerging in Colombia is underscored by a sharp decline in government revenue for the first half of 2020 which plunged almost 2% compared to the same period a year earlier. Combined with increased spending and crumbling taxation revenue this saw the budget deficit blowout to 8% of GDP. Stimulus spending, aimed at mitigating the impact of the pandemic on the economy, is being funded by debt. Central Bank data shows total central government debt at the end of 2019 was around $137 billion or 55% of annual GDP. That is expected to balloon out by at least 10% during 2020 as Bogota struggles to increase income and fund stimulus spending aimed at restarting the economy. As Colombia’s sovereign debt load increases it will weigh on attempts to return the economy to growth, reduce unemployment, and bolster government revenues.

Attracting oil industry investment is an important means bolstering oil and natural gas production, growing hydrocarbon reserves, lifting government revenue, and strengthening economic growth. It is believed that fracking offers the most potential for achieving those goals and bolstering Colombia’s energy security. Since taking office in August 2018 President Duque has been a vocal proponent of the controversial hydrocarbon extraction technique, seeing it as a silver bullet for Colombia’s economy. The commercial development of fracking has the potential to be a game-changer for the Andean country’s oil industry because national oil company Ecopetrol estimates that Colombia possess up to 12 billion barrels of recoverable shale oil and 100 trillion cubic feet of natural gas resources. It is believed that fracking will triple or even quadruple Colombia’s proven oil and natural gas reserves.

There is, however, substantial domestic opposition to fracking. Despite oil industry regulator, the National Hydrocarbons Agency (ANH – Spanish initials), completing shale block auctions as far back as 2012, hydraulic fracturing has yet to become commercially operational in Colombia. In 2018, as the central government and the ANH moved ahead with plans to, yet again, promote unconventional oil exploration and production, Colombia’s highest administrative tribunal placed a moratorium on the technique which it upheld in September 2019. The court determined, however, that the ruling did not prevent investigative projects and in September 2020 it rejected (Spanish) a bid to ban fracking pilots in Colombia.

In November 2020, Ecopetrol secured the rights to a fracking pilot in the Middle Magdalena Valley through an auction of three unconventional land packages by the ANH. There is still considerable uncertainty surrounding the pilot because Colombia’s environmental regulator has yet to approve the project. There is no guarantee it will be approved when it is considered that in July 2019 the environmental regulator suspended the licensing of Ecopetrol’s APE Guane A fracking operation in the Middle Magdalena Valley. Ecopetrol was the only energy company to participate in the ANH auction, underscoring how the uncertainty surrounding the future of fracking in Colombia is deterring investment in unconventional hydrocarbon assets by foreign energy companies. This points to the ANH’s next auction of three fracking pilot contracts also foundering. That makes Ecopetrol the key driver of the development of Colombia’s unconventional oil potential. The state-controlled integrated energy major plans to invest almost $77 million in the Middle Magdalena Valley unconventional oil and natural gas Kale project. 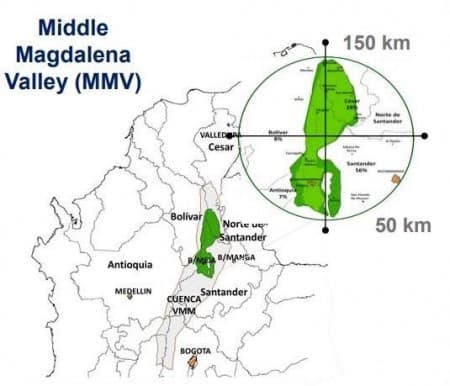 Ecopetrol believes the Middle Magdalena Valley has 4 billion to 7.4 billion recoverable barrels of oil equivalent. Ecopetrol has earmarked $600 million in its 2021 budget for unconventional plays, although most of that will be directed to its operations in the Permian where it has partnered with Occidental Petroleum.

While commercial fracking will be a game changer for Colombia’s oil and natural gas sector the controversial hydrocarbon extraction technique is surrounded by considerable controversy, opposition and uncertainty. When that is coupled with a lack of social license, legal moratoriums, and serious security issues it is clear why foreign energy companies are reticent to invest in unconventional oil and natural gas projects. It is thus unlikely that fracking will be the urgently needed silver bullet for Colombia’s troubled economy, or that Bogota will benefit from the tremendous additional hydrocarbon production and revenues that fracking has the potential to generate.

By Matthew Smith for Oilprice.com