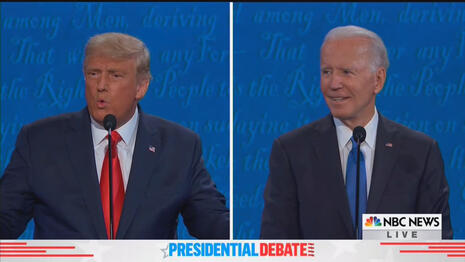 Four years ago, the Big Three broadcast evening newscasts tried to destroy Donald Trump’s 2016 presidential campaign with historically negative press coverage. This year, those newscasts are doubling down, with coverage that is even more hostile to the Republican. Meanwhile, his Democratic challenger, Joe Biden, is enjoying mostly positive coverage and a friendly media that’s virtually ignoring all topics — such as the scandal swirling around his son, Hunter — that might harm his prospects.

For this study, the MRC analyzed all coverage of President Trump and former Vice President Biden on the ABC, CBS and NBC evening newscasts from July 29 through October 20 (including weekends). This is the same time period examined by the MRC four years ago, in advance of that year’s election.

This time around, it’s obvious that the networks are pouring their energy into confronting and criticizing the President, not equally covering both campaigns. During the twelve weeks we examined, Trump received 839 minutes of coverage, compared to just 269 minutes of airtime for Biden, a three-to-one disparity.

f Trump’s coverage seems nightmarishly negative, Biden’s media profile might be a dream-come-true for a presidential nominee, especially one favored in the polls. Out of 91 evaluative comments, Biden benefitted from 60 positive statements, vs. only 31 that were negative, adding up to a sunny 66% positive good press score. 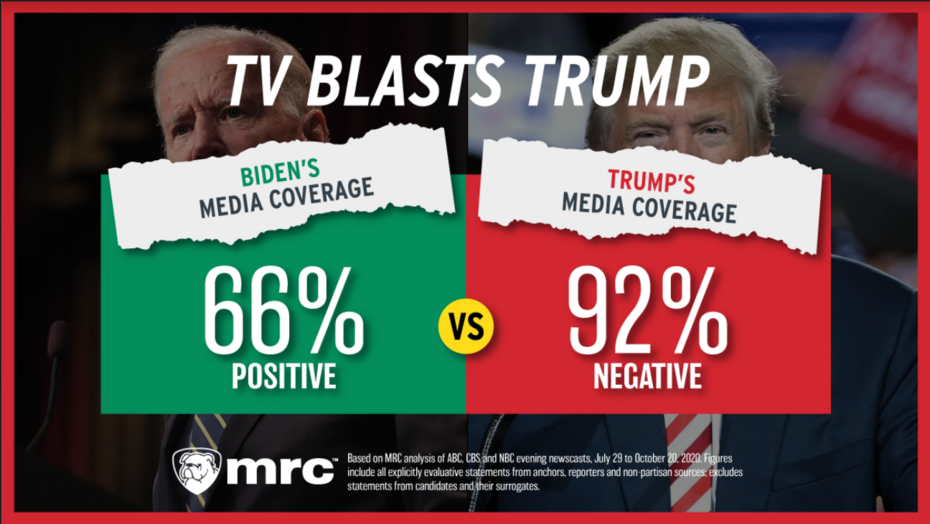 The three evening newscasts have been relentlessly negative throughout Trump’s presidency. From Inauguration Day, January 20, 2017, through October 20, 2020, our analysts have tallied 16,755 evaluative comments, 90.5% of which (15,161) have been negative. While the topics have shifted from the Russia-collusion investigation to Ukraine and impeachment to this year’s coronavirus pandemic, the networks’ hostility has been incredibly consistent.

But the basic premise of our democracy is that voters are presented the facts about both sides, and then make up their own minds based on their own values and their own views of the candidates. What we’ve seen in this campaign, and over the past four years, is the establishment media choosing to abandon its traditional role and become combatants on behalf of liberal politicians.

When supposed news coverage becomes so tilted against one party in favor of another, it fails in its core mission to serve voters. Regardless of who wins next week’s election, the news media will be in desperate need of reform.