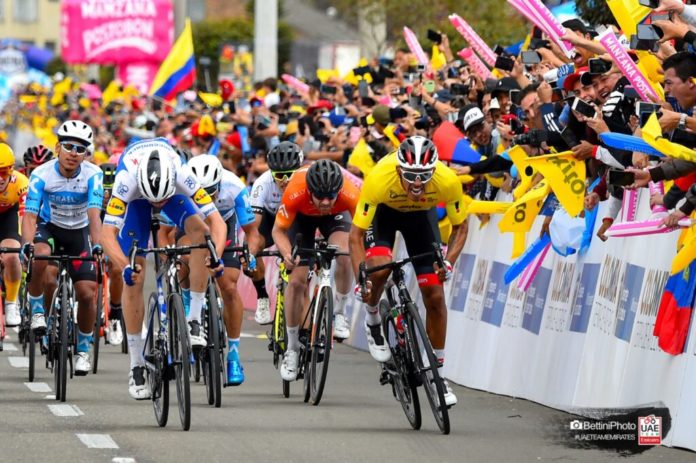 Sebastián Molano (UAE) was the fastest cyclist at the end of the fifth stage of the Tour Colombia UCI 2.1, claiming his third victory. The penultimate day of the competition ended up in a very close sprint between Molano, Álvaro Hodeg (Deceuninck – Quick Step) and Jonathan Restrepo (Androni Giocattoli-Sidermec) who made today’s podium.

Crowds cheered on the athletes from bridges, on the roads and especially in the streets of Zipaquirá’s where many wanted to see their hometown idol Egan Bernal, the first Colombian to win a Tour de France. The passion for cycling in this town has been a tradition since one man from Zipaquirá, Efraín Forero, was the first champion of Vuelta a Colombia.

With the final day looming large, Sergio Higuita kept the leadership of the general classification followed by his teammates Daniel Martínez and Jonathan Caicedo. Education First Team has more than one card to play in the mountains today.

Nonetheless, INEOS will be looking to overturn the EF kingdom at Tour Colombia. To achieve it INEOS boasts current Tour De France champion Egan Bernal who is set fourth, or the Giro de Italia champion, Richard Carapaz, who is fifth only 58 seconds behind the leader. Everybody is expecting  INEOS to launch brutal attacks during the final stage.